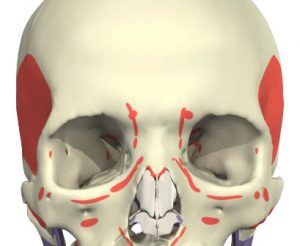 The procerus is a midline flat and pyramid shaped muscle vertically significantly from patient to patient. Its oriented is at the root of the nose. In general men have a larger muscle. It is associated with transverse glabellar rhytids .

The procerus originates from the periosteum and perichondrium of the nasal bones and upper lateral cartilages and from the fascia of the nasal SMAS (Fig 2). It inserts into the midline skin overlying the nasal root and thus has no bony attachments. The procerus interdigitates superiorly with the frontalis muscle, inferiorly with the nasalis muscle, and laterally with the depressor supercilii, orbucilaris oculi, and deeper corrugators muscles(2). The motor innervation to the procerus comes from the zygomatic branch of the facial nerve. Its blood supply is derived mainly from the angular branch of the facial artery.

USE OF BTX-A FOR AESTHETIC ENHANCEMENT OF THE GLABELLAR REGION

The importance of attenuating the action of the procerus and corrugator muscles for aesthetic improvement of the glabellar lines was recognised by Salvadore Castanares in 1964. Until the emergence of BTX-A as a safe and effective non-surgical alternative to upper face cosmetic surgery that could only be achieved by resection of the corrugator and procerus muscle fibres near their origin in the glabella region through an upper blepharoplasty incision.

In 1992, Carruthers et al injected 18 patients with BTX-A for the treatment of glabellar frown lines following keen observation of the improved appearance of facial soft tissue in patients who received the toxin for a spectrum of disorders related to facial dystonia(3). Sixteen of 17 patients showed improvement for varying lengths of time with few side effects. This initial paper sparked a frenzy of interest across the globe. Following a number of publications, two randomised, placebo-controlled studies involving 537 patients confirmed the impressive safety and efficacy of the injection of BTX-A for the glabellar rhytids. This led to the Food and Drug Administration (FDA) approval of BOTOX-A for the treatment of glabellar lines in 2002. In 2006 BOTOX was also granted a license from the Medicines and Healthcare products Regulatory Agency for the temporary improvement in the appearance of moderate to severe glabellar lines in women and men aged 65 or under when the severity of these lines has a psychological impact for the patient.

Botox Injection Tips : Over diluted BTX-A injected into the corrugators near or at the supra-orbital rim can lead to diffusion of the toxin into the upper eyelid retractors (i.e. levator palpebrae superioris) causing ptosis s (Fig 4). Use higher concentration, therefore reduced volume, and apply a “high glabellar technique”, that is at least 1.5cm above the orbital rim n order to minimise risk of eyelid ptosis.

In conclusion, the ever-growing spectrum of medical aesthetic treatments, optimal results are achieved only with the highest level of understanding of the causes of ageing and the associated pathophysiology, sound anatomical knowledge, refined skills, effective and safe treatment modalities, and appreciation of the aesthetic result desired by our patients.

The next article will discuss the frontalis muscle. This indication is part of the foundation botox training  course for the treatment of horizontal forehead lines.

Subscribe at the foot of this page for a notification about up coming articles and resources.

We use cookies to ensure that we give you the best experience on our website. If you continue to use this site we will assume that you are happy with it.OkPrivacy policy