This is the first in a series of articles on anatomy. Dr Sotirios Foutsizoglou writes about the functional anatomy of the glabellar complex and botox injection tips when treating the glabellar frown lines. The frown lines also know as “11” lines are part of the foundation botox training courses. The full theory for the foundation course is now available online.

Excerpt from the article by Dr Sotirios Foutsizoglou.

I am starting this series of articles on aesthetically oriented anatomy with the glabellar complex, one of the three most common areas treated with BTX-A along with the forehead and the orbital part of the orbicularis oculi. Historically, the glabella was the area first and most described as a potential treatment site with BTX for aesthetic enhancement. Until quite recently, it was the only facial anatomical region with both FDA and MHRA approval for the cosmetic use of BTX. Non-surgical treatment of rhytids in the glabella can be applied in various combinations to achieve the desired result.

What is the term glabellar complex?

The glabella area is defined as a smooth prominence, most marked in males, on the frontal bone superior to the root or bridge of the nose that extends laterally to each side onto and just above and lateral to the medial head of the eyebrow. The “glabellar complex” often refers to a group of the brow-associated muscles (mostly depressors in action) that function primarily for facial expression.

The muscles of the glabellar complex include the corrugator supercilii, procerus, depressor supercilii, and the medial part of the orbital orbicularis oculi. Vertical glabellar frown lines arise naturally from the repeated activity of the corrugator supercilli and medial orbital orbicularis oculi and, to a lesser extent, the depressor supercilli muscles. The three afore mentioned muscles not only induce vertical descent of the medial eye brow but also cause adduction and depression of the surrounding soft tissue (Fig 1).

Fig 1:Shows the deep glabellar frown lines with animation on command (dynamic lines). The frown pattern can vary significantly in individuals. Demonstrated here are the obvious deep central or ‘11’ lines originating within the glabella and extend cephalad towards the hairline. Multiple lateral smaller oblique lines over eyebrows can also be noted along with depression and adduction of the medial and middle parts of the eyebrow skin. The horizontal lines over the bridge of the nose, typically located at the most caudal aspect of the glabellar complex are a manifestation of the muscular activity of the procerus (mainly) and depressor supercilii muscles.

Fig 1 shows 2 Individual Frown Patterns Male Left & Female Right(large image)
The paired corrugator supercilii muscle originates from the medial end of the supra-orbital ridge on the frontal bone, deep to the orbicularis oculi muscle. It passes upwards and outwards through orbicularis oculi to insert into the skin of the middle of the eyebrow and the fascia on the deep surface of the frontalis muscle. The corrugator supercilii is pierced by the supra-orbital and supratrochlear neurovascular bundles after they have exited a notch or foramen in the supra-orbital rim at a distance of 2.7cm and 1.7cm respectively from the midline. It is motor innervated by the (upper) zygomatic and temporal branches of the facial nerve and its blood supply is derived from branches of the superficial temporal artery. Contraction of this muscle causes vertical grooves or furrows in the glabellar skin and imparts an angry expression. Contraction also causes an infero medial descent of the medial portion of the eyebrow. (Fig 1). 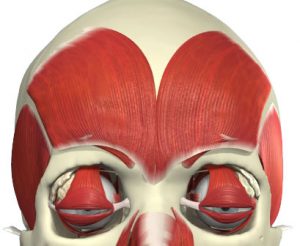 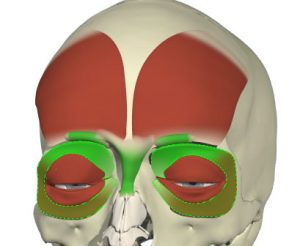 Tip 1: As the muscle courses laterally, it becomes superficial, with its ending point being at a variable location in the eyebrow skin. Therefore, BTX injection into the lateral part of the corrugators, near its insertion into the skin of the eyebrow, should be superficial; whereas placement of the toxin to the belly of the corrugators should take place deeper, just superficial to the periosteum of the supra-orbital rim. Care should be taken to avoid puncturing the periosteum with the needle as this can cause headaches and post-injection pain, probably due to periosteal inflammation.

Subscribe at the bottom of this page to receive a notification for the next part of Botox Injection Training  Tips.

Part 2 of the series of articles relating to the anatomy for botox injection is now available.

Aesthetic medicine is still developing. It is great to share our experience and knowledge to ensure the future development of expertise in this exciting field of medicine. We appreciate any feedback on the subject discussed in this article.

You may also be interested in Muscle Matters. This article reviews the different types of muscles.